In the last few lessons with Class 5, Lena* has been asking me the same questions: “When do you leave?”, “Will you be here for my birthday?”, “Will you come to Karneval with us? Are you dressing up?” “Maybe…“, I reply. “But you’re a teacher!” they chant.

It was a coincidence that Hana* from Class 6 sat next to me on the bus home from school the other day. She was asking similar questions: “But why do you have to leave? Will you come back and see us? Do you have Whatsapp? Can I have your Whatsapp?”

For those who are unfamiliar with the tradition, the carnival period started last Thursday (the week before Lent). The children had Thursday afternoon until the following Wednesday off school. Because the end of my placement coincided with carnival, my last day was on Thursday, known as Altweiber-Donnerstag, and it was full of mixed feelings. I prepared an Abschieds-Frühstuck (goodbye breakfast) – fresh bread rolls, Cheddar cheese (I’d managed to find some in Aldi the week before!) plus some Marmite – for the teachers of staffroom 5 to try. Although I wasn’t able to say goodbye to everyone due to the busy carnival season and others’ prior commitments, my last day was very happy. The children performed an impressive series of dances and songs in their many colourful carnival costumes, and the carnival party felt a party celebrating the end of my assistantship. It marked the fact I had seen the experience through to the end, despite the challenges and knocks along the way.

Following this, on Friday evening my choir was singing at the local carnival night at a Gasthof (pub) in my village. After watching the dance troupes, brass bands, and stand-up comedian (whose jokes I am sure were brilliant if you were fluent in both dialect and humour) all take to the stage, it was soon our turn to perform. We sung my favourite song in the local dialect (Kölsch) – here’s an excerpt if you’re interested… can anyone understand it!? Luckily one of the choir members volunteered to be my Kölsch Translator! 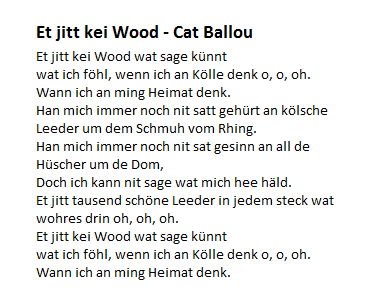 Bear in mind we swapped Köln (Cologne) with Gladbach (Mönchengladbach). I felt so happy to be muddling through the words together on the stage with my friends. I knew this would be my last time singing with the choir for a least a few years, so I enjoyed simply being with them in that moment. The evening ended up being the most fun I had had in a long time.

I was invited by my lovely teacher friend to spend Saturday evening in Cologne with her and some friends. I have to say I was not prepared for the throng of people flooding the streets: in every direction there were unicorns and pirates. Before I knew it, I found myself trapped in a tight crowd of people chanting carnival songs, many of them already inebriated.

Unfortunately, I challenged myself too much here – the situation set me into panic because the crowds and noise level were overwhelming. Finding my way back to the central station via side streets was not without its stress, so I would recommend staying in a group at all times, or choosing quieter times and locations to experience carnival if you know crowds are not your favourite thing. Following that experience, I decided to keep out of the way of the chaos in Cologne on Rosenmontag (traditionally the highlight of the carnival period).

Veilchendienstag (Shrove Tuesday) was the last carnival day, and incidentally my final day in Germany too. Before meeting up with a few friends to say farewell, I took a walk through the city centre, where a carnival parade was starting at exactly 13.11. I waited in the old market square, wondering if I were in the right place. I got talking to a lady who was anticipating the procession too, and she insisted that I follow her to the best viewing spot. Here, we picked up sweets as each carnival float went by, chanting “Halt Pohl!” – interestingly the words used as a call vary in each town and even district, making this a regional and local tradition.

My unique German experience ended on a high with Karneval. In a nutshell, from my time in Germany I will certainly miss the children, the staff, the strangers, the friends, the neighbours, the volunteers, the choir… the conversations, the bridge between generations, and the intercultural connection. In short, the solidarity, despite political goings-on. It was a privilege to have been able to get to know the young people and their stories from war-torn countries, but the downside of this was having to absorb and process their trauma, which still haunts me. The smiles and warmth of their final embraces, however, will stay with me forever.

I will write again in the next few days to tell you about my journey back home, and my preparations for moving to Paris – it’s happening in just under two weeks!

As I have finished the first part of my year abroad (I still find that hard to believe as I write this), I want to say a big thank you to those who have been reading the blog and given their support.