Having the freedom to roam is one of the best things about being on a year abroad. Since my last post I have been spending a lot of time outside, including exploring the woods around Heidelberg (apart from the time spent in classrooms studying, which has been 70% of the time). Sometimes in a group, but often by myself, being able to connect with nature really does help me stay calm.

Last weekend, I made my way to Heiligenberg, a mountain area near Heidelberg [right]. I didn’t have a clue where I was going, and ideally would have gone with my classmates. I didn’t have a map, and I lost count of the number of times I had to ask strangers “welche Richtung” (which direction) I should be heading in.

But in the end it was a positive thing to go for a long walk by myself.

I walked up to an open-air theatre (called “Thingstätte“). It was build during the Third Reich and had places for 20,000 people to watch performances. You can read more about it by clicking the link above. The theatre is now used only very occasionally.

The design of the theatre impressed me, and so did its dramatic location – it dominated the surrounding forest.

I walked right to the top of the theatre, took a seat, and started to draw. Two Germans walked over to me, one of them whispering “zeichnen” – she’s drawing. They asked me why I was drawing, what I was doing in Heidelberg, what I thought of the theatre… 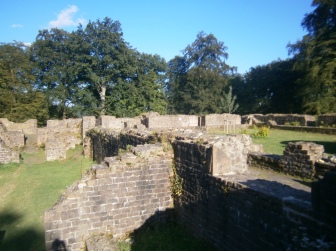 I said goodbye and walked up to the cloister ruins (of Monastery of St. Michael). However, funnily enough, on my way back down I bumped into the two Germans again. They were heading back in the same direction as me, and suggested we take a short cut together. We talked some more – they were very friendly and good company.

Shortly after, I made my way back on the tram. When I got off, guess who was there again!? The very same man I met earlier. He invited me to play “Brettspiele” (board games) with them one evening!

And, being the inquisitive person that I am, I decided to do something different, and go along to the public board games evening at a community hall on Wednesday. I spent quite a while looking at bus times and maps to make sure I knew how to get there, and took my classmate along too.

The evening itself was good fun! The Germans I met on my walk welcomed us, and showed us the cupboard of games we could choose from… there were hundreds, from German card games to classic multiplayer games. It was a wonderful experience to see all generations and nationalities playing board games together under the warmth of the evening sun.

The Germans explained the rules of the game, Carcasonne, very thoroughly, but despite their patience it took me half the game to get a feel for how it should be played! I’m sure many of you can relate… Our fellow players took the game very seriously – spending minutes considering each move, exclaiming with “Schimpworte” (swear words).

Needless to say, I lost the game.

I found myself in another forest on another day this week. This time, I visited Königstuhl, a hill near Heidelberg with spectacular views of the city. I reached the top by taking the fernicular railway. I used to be afraid of those as a child because of the enclosed spaces and height, but I actually felt safe this time: I was in awe of the surrounding city.

Once I reached the top, I went for another walk. When I got tired, I found a bench, and sketched for a while. I could hear someone peering over my shoulder from behind, which was distracting to say the least! The man from behind told me to “weitermachen” (keep drawing). A few minutes later, before he walked off, he pointed at my sketchbook and said “Respekt” with a smile.

Maybe this sculpture in the forest could be a metaphor for what I’ve been doing – somehow finding the confidence to meet new people, and communicate in another language even when it gets tough.